I always have such high hopes this time of year. Regardless of what kind of year it has been, the next is always full of promise. It’s the fresh start I’ve been looking for. I can re-group, re-focus and start anew. I’m high on anticipation and expectation.

But by February, the high is gone and my enthusiasm has waned. I’m now overwhelmed by disappointment and frustration. The changes I wanted seem impossible (what was I thinking?). The things I’d like to see happen aren’t anywhere in sight (people aren’t cooperating). And what I want to see God do……well, I can’t see anything for the discouragement and exhaustion.

What happened to my year full of promise? And why do I repeat this same scenario year after year only to be disappointed year after year? I usually end up throwing in the towel along with those lists. And try not to indulge in too much self-loathing as I ask myself: “Why can’t I do this? Why is this so hard?”

But – one day I’m reading in Galatians and the light bulb comes on. Galatians 5:25 Since we are living by the Spirit, let us follow the Spirit’s leading in every part of our lives.

I think I may have finally discovered my problem. There’s way too much of me involved. I’m being Kim led – not Spirit led. I’m the one calling all the shots; listing the changes I want, what I want to see happen and what I want to see Abba do. It’s my agenda and I’m leading the way. I’m taking charge.

I’m also the one trying to make it all happen. On my time-table of course. Always sooner rather than later.

No wonder I’m frustrated. And exhausted.

All I need to do is let Holy Spirit lead me into Abba’s plan for my life.

So I’m not waiting until February. I’m throwing in the towel now. I quit writing list of what I want to see. Instead of setting my own agenda for change, I’ve decided to ask Holy Spirit to lead me into Abba’s plan for 2015.

My part is to follow Holy Spirit, listen closely and then obey. That sounds a lot easier and a lot less stressful.

So this year, I sit down with pen and paper to listen. I will write down only what He whispers into my heart. And that will be my focus for 2015. 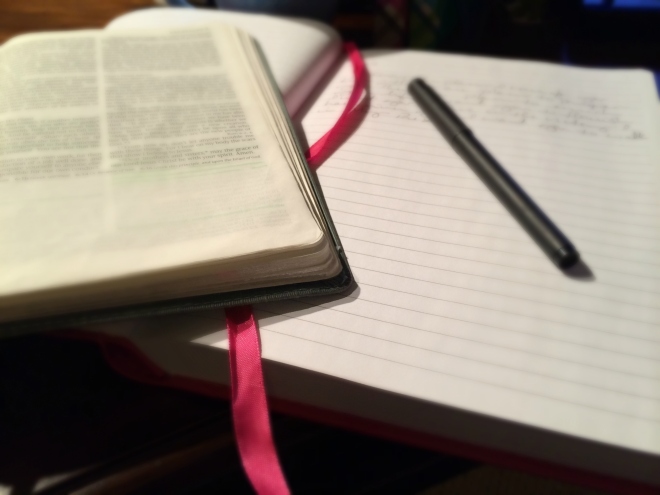